Six runners who will run their first ever marathon on 16th October! 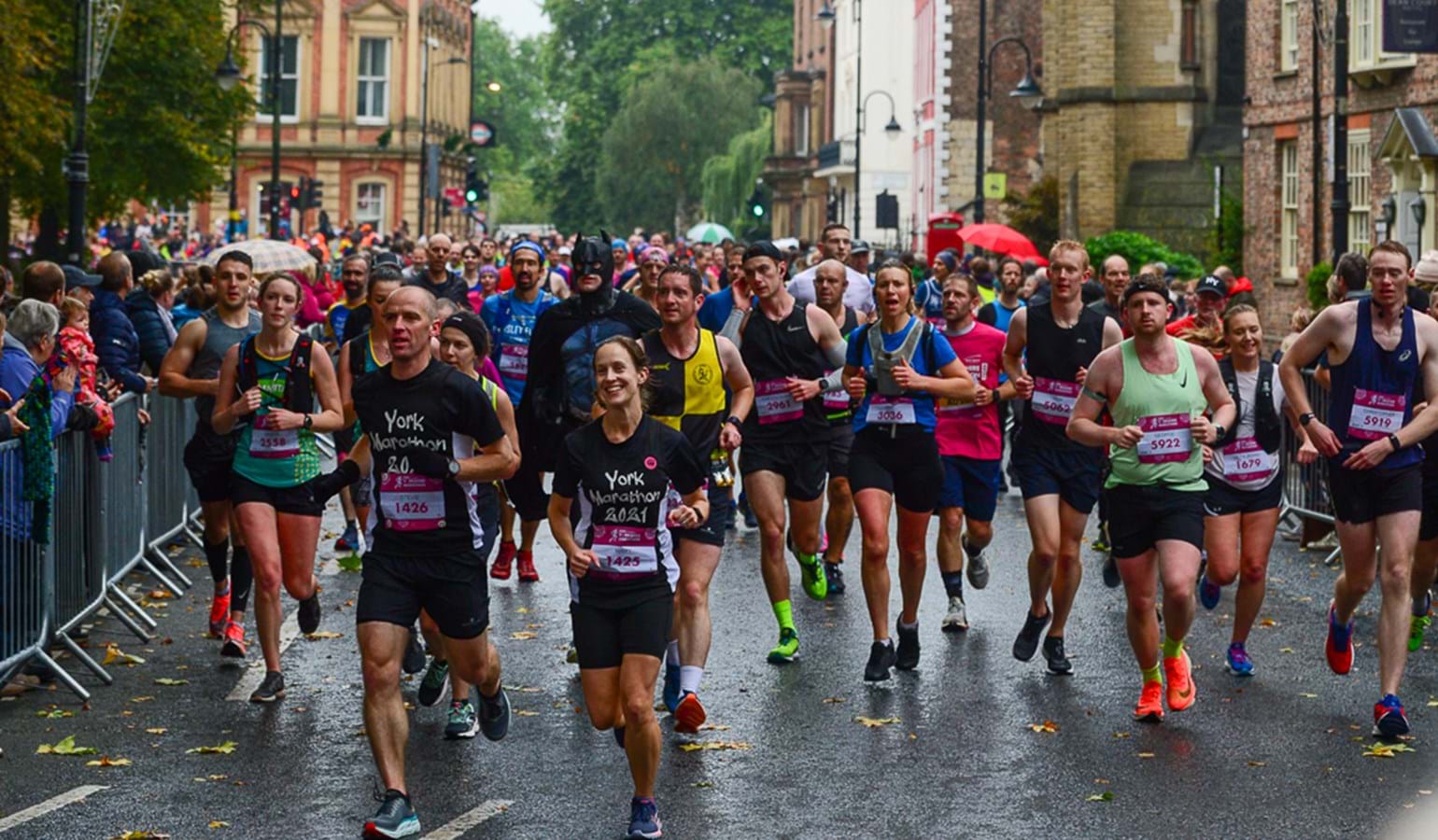 The first marathon is a very exciting milestone for many runners. Running 26.2 miles is a huge achievement, after all! We caught up with six runners who will be completing the Yorkshire Marathon as their first ever marathon. It takes a lot of courage to sign up, and we’re so happy all these runners have chosen our event as their longest ever run.

Each of these participants are of different ages and backgrounds, and they each have their own reasons for running. Whether it’s a personal challenge, a way to fundraise, or part of a shift to a healthier lifestyle, they have one thing in common: they have committed to being on that start line on Sunday 16th October.

Despite how different they are, these first time marathon runners are feeling the same thing: they’re nervous but also very excited to achieve something so huge. Read on to find out more about each of their unique stories. 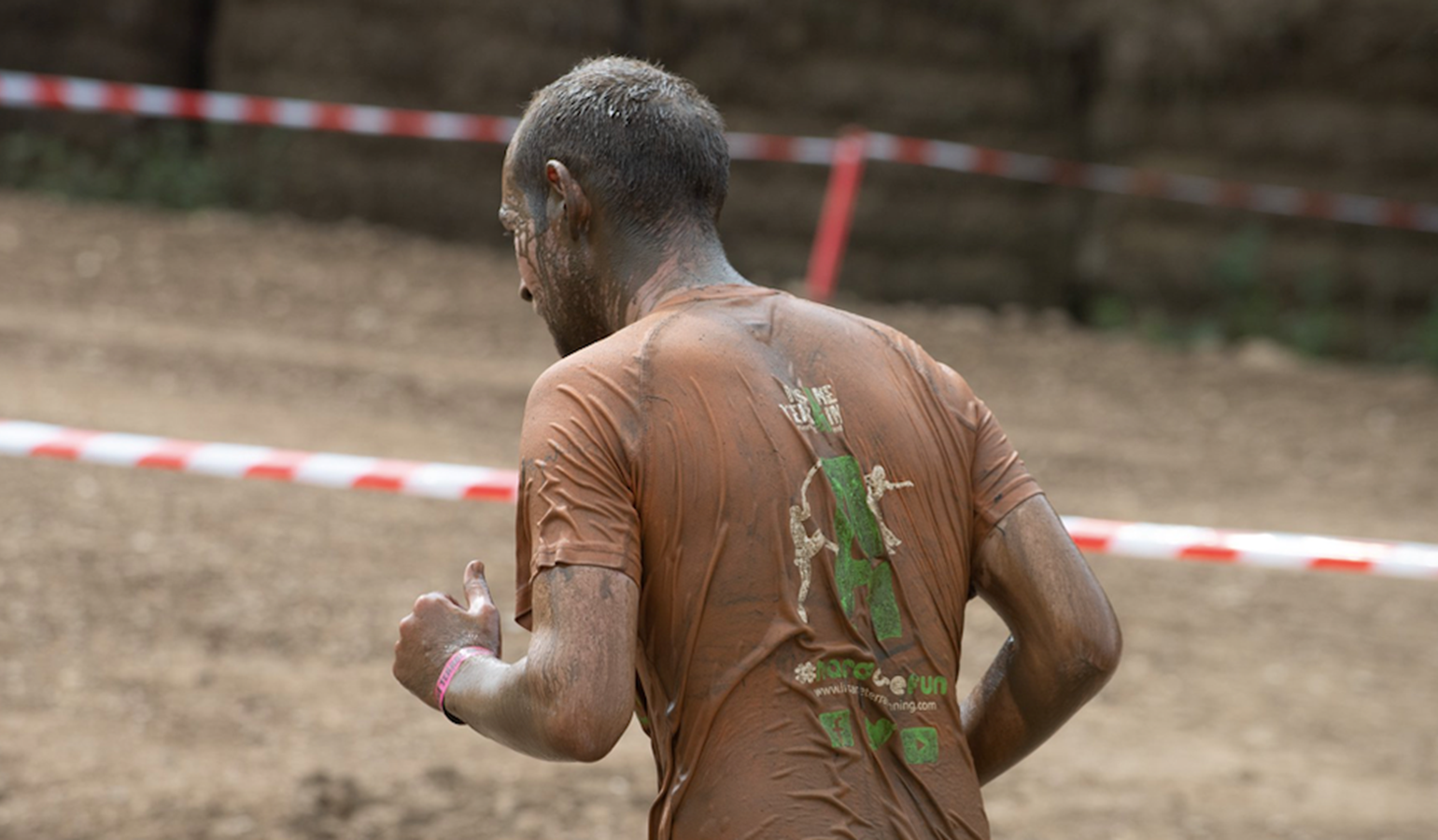 Chris Poole is a managing editor who lives in a village near Cambridge called Waterbeach. He has wanted to do a marathon for a long time, but after getting injured while training for the 2022 Malta Marathon, he had to put that dream on the back burner. “I've wanted to do a marathon for ages. I've done a few half marathons but sadly two half marathons don't add up to a full one!”

Although Chris says he’s not really a natural runner, there are definitely many things he enjoys about it. “I love seeing wildlife outdoors (I'm lucky enough to often run by the River Cam) and running new routes to unknown places. But also, I love the feeling when I get back from a run at what is a decent pace (at least for me) and knowing that I'll be tired but fitter - there's a great sense of accomplishment. I know some people hate it but I have to say I love sweating buckets too when running!”

He chose the Yorkshire Marathon for a few reasons: he liked the scenic route, it’s flat, and “it’s the longest distance at this event as far as I'm aware (i.e. there's no ultramarathon or six-hour event going on at the same time). For some reason it wouldn't feel like as much of an achievement if others are running way further!”

60-year-old Hilary Casey lives in the village of Cayton, just south of Scarborough. She’s semi-retired and works two days a week as a receptionist for a chiropractor. Hilary has decided to enter the Yorkshire Marathon in memory of her sister Wendy.

“She was my older sister by 13 years so she practically brought me up,” Hilary explains. “She was a runner along with her husband and ran many marathons and half marathons etc. she ran the London Marathon twice and also the Jungfrau Marathon twice. That was near her home in Switzerland. I tried to support her and was often a bag carrier. Wendy was diagnosed with breast cancer 12 years ago, about a month after she had run her second London Marathon.”

After gruelling treatment, Wendy’s cancer returned in her spine six years ago. “Whilst she underwent continual treatment to keep the cancer at bay we met in Geneva, York and London twice to run 10Ks together,” Hilary explains.

“She took the turn for the worse last October and I managed through Covid restrictions to get over to see her twice whist she was in hospital and finally a care home. I promised her I would run a full marathon for her. She had previously talked me into running half marathons but never a full one.

“I tried to get a place in London to run in her footsteps but didn't get a place so, as York was a place we met often, that was a perfect alternative. Wendy died in January of this year aged 73. Every time I go out to run, I think of her.”

Training is going well for Hilary, and she’s looking forward to the big day. “I am slightly nervous but then that's normal. I am nervous about getting injured, hitting that wall and negative thoughts which do happen. But with good preparation and training then hopefully these things won't be a big deal.

I am looking forward to getting over that finishing line...also just being part of something which is good, raising money and awareness of charities and just soaking up the atmosphere on the day.”

Hilary is fundraising for Macmillan: “My sister at the end of her life had wonderful treatment in Switzerland but they don't have hospices like we have and talking to the nurses there they all said that our MacMillan nurses are the envy of the world.” To see Hilary’s JustGiving page, click here.

Mark’s a forklift truck driver from Hartlepool. He lives with his wife and two daughters and is a big fan of Liverpool Football Club. He started running in 2017 when he signed up for a charity 5K with some friends.

“The running bug got me. A friend talked me into joining a local running group and I haven't looked back since.” Mark’s taken on a few half marathons, but only just decided to tackle the full 26.2 miles.

“I always said that I wanted to run a marathon, just never had the self-belief. After reading reviews and due to location to my home town, York was the obvious choice for my 1st Marathon.

“Running has really saved my life, the amount of weight I have lost since running is unbelievable. Running takes away all my worries and cares, it’s just me and the tarmac.”

Although he’s a bit nervous about “hitting the wall and not being able to complete the run, he’s looking forward to “the atmosphere, the amazing city of York and the run itself.” 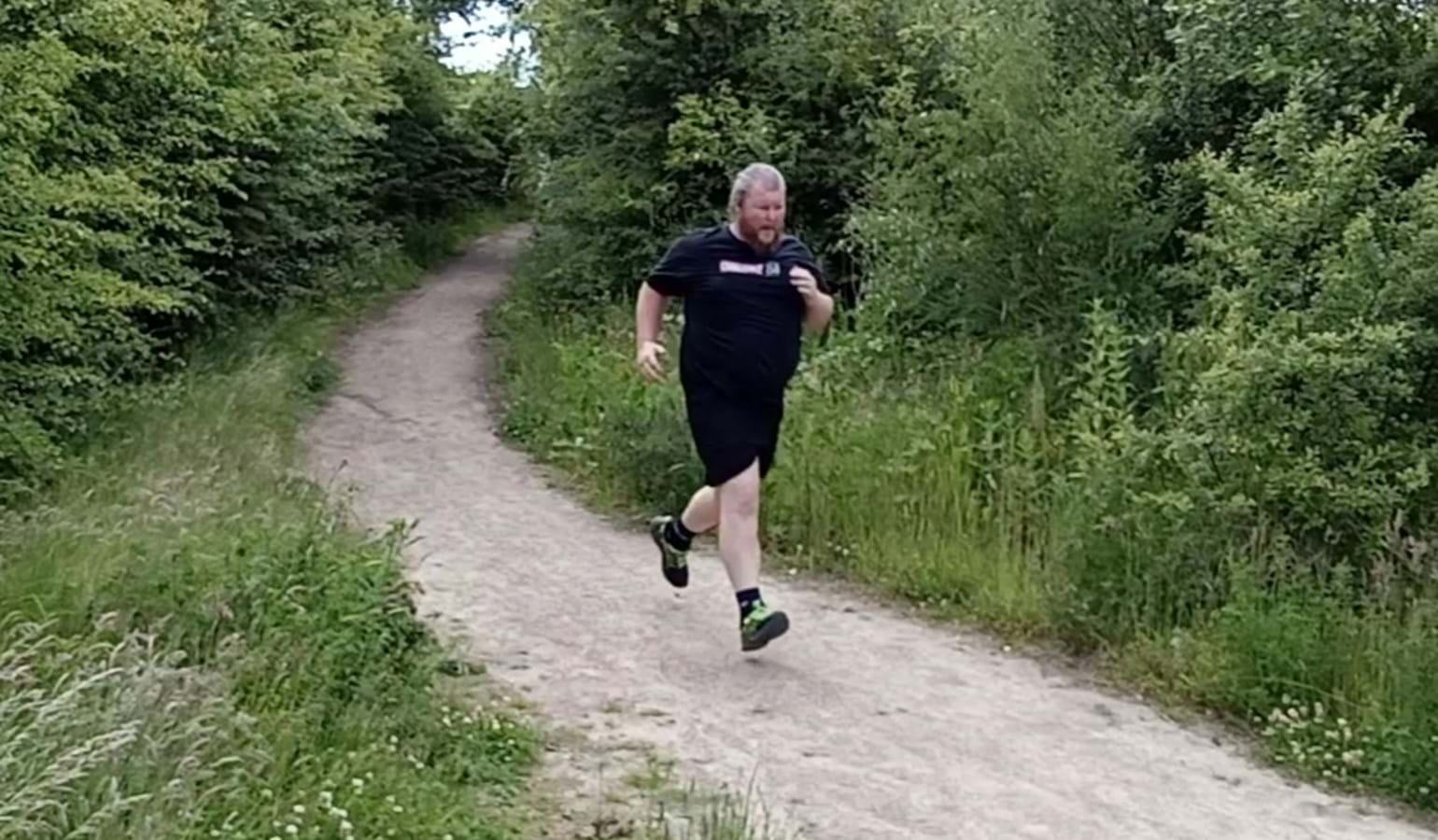 Jamie Simpson is a 36-year-old “family guy” living in Sheffield with his sons Thomas (7), Samuel (3), partner Lorraine, and their dog Odin. The Yorkshire Marathon isn’t just Jamie’s first marathon – it’s his first ever running event! “When signing up to take part I hadn't even been out for a jog around my neighbourhood.”

The marathon is a chance for Jamie to prove what’s possible to himself and others. “I wanted to challenge myself while also documenting my experience to hopefully inspire others to make changes to their lifestyles. So if a guy weighing 23 stone, being a complete beginner at running, can complete a marathon with 150 days of training, all while achieving an impressive weight loss/body transformation, it will hopefully show that anything is possible if you aim for success.”

Jamie picked the Yorkshire Marathon as “I really liked what I saw it was all about, the run for all, the atmosphere and beautiful buildings I've seen the previous years’ videos online made me know I was choosing the right marathon.” It also conveniently fit his timescale and is fairly flat, so those were big selling points too!

Training has been going well for Jamie, and he’s been enjoying the endorphins that come after a long run. “Most of all I love the mental getaway, it's like meditation for me, I'm not thinking of life's stresses, things that need doing, what work is on tomorrow etc.”

To keep himself accountable and to log his training progress, Jamie has set up a YouTube channel. You can check it out here. He’s also using the marathon as an opportunity to fundraise for his children’s school, so they can buy new outdoor equipment. You can see his GoFundMe here. 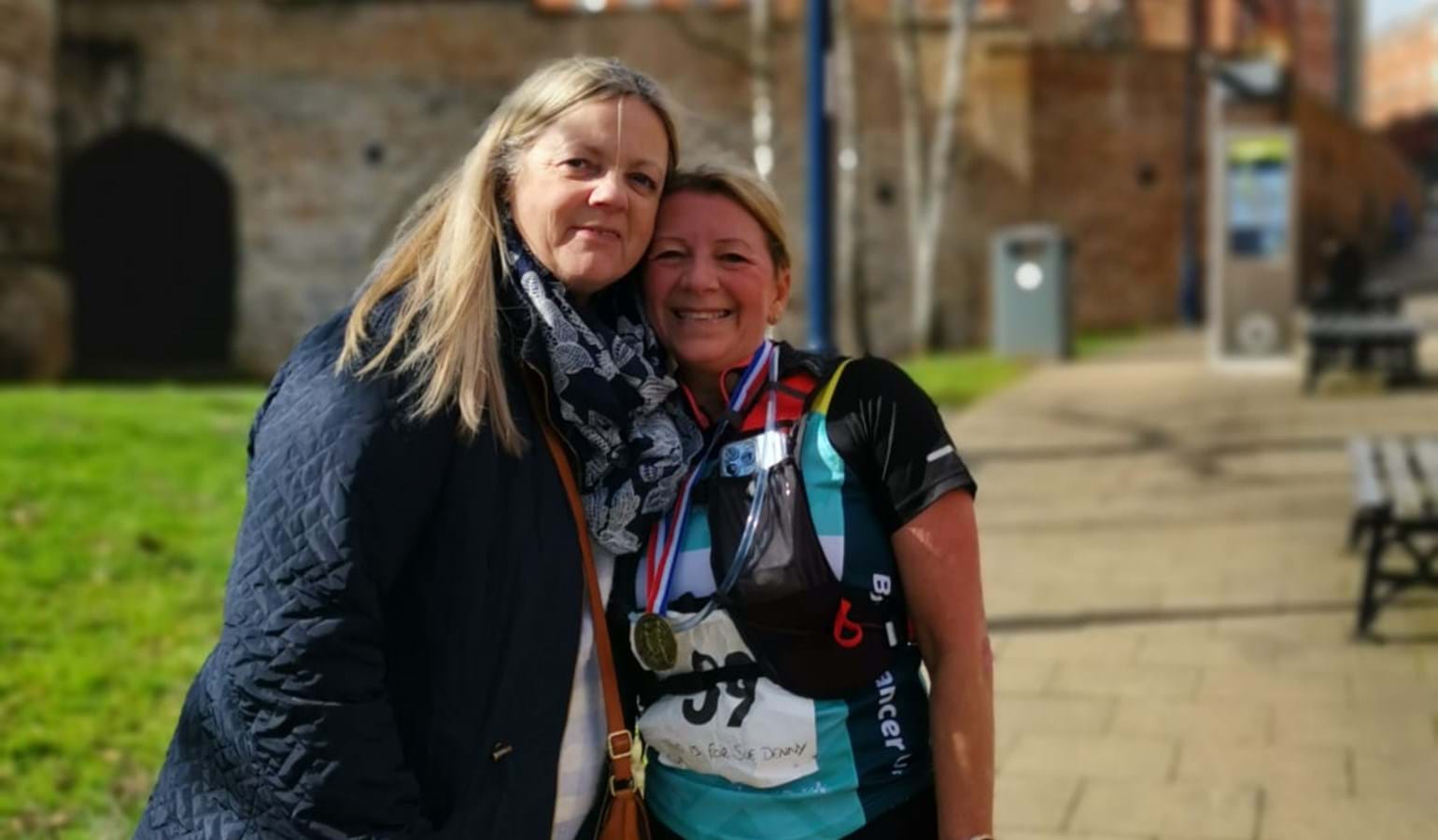 Donna is originally from Burnley and now lives in Ashfield, Nottinghamshire. “I work as a full time veterinary receptionist which I really enjoy.” She first started running 11 years ago and has done parkruns, 10Ks, half marathons, and two 16 mile runs for bowel cancer.

“I decided this year to enter my first marathon, the Yorkshire Marathon, along with lots of friends in a running group I’ve joined called the Mountain Goats. There are quite a few from the group doing this and I got talked into it. I have to say I am feeling very nervous and excited to be doing it.

“My training has now begun and seems to be going well. I’m slowly increasingly my mileage every week, have got a niggling hamstring but hopefully with lots of stretches this will ease.

I have a very supportive partner who’s doing everything possible to help with my training.”

Donna enjoys getting outside in the fresh air, running with friends, the mental health benefits, and raising money for different charities at running events. For this event, she wasn’t planning to register with a charity, but changed her mind after her best friend passed away from bowel cancer in June.

“I have signed up to McMillan cancer research and aim to raise as much money as I can for this cause to help many others out there that are suffering. My best friend’s family and my family are all coming to support me and this will be in memory of her. This event for me is going to mean so much to me in many different ways and I’m very determined to do this.

“I’ve always enjoyed running and love to push myself that little bit further, I’m not going to lie, I am feeling very nervous and anxious that I won’t complete it, I know it’s going to be tough and will be walking some of it but to complete it will be a great achievement for me.”

28-year-old Jack lives in Leeds and is studying for a degree in Sports and Exercise Nutrition while working for a sportswear retailer. “I have always wanted to complete a marathon, I have never been bothered about medals or finisher t shirts, but the emotion and the support it brings out on the day is special.”

Jack is a type one diabetic, and has been for most of his life, which has meant that he needs to be strategic about how he trains. “I have run (forgive the pun) into some complications of late and have been using a running routine to aid insulin sensitivity on a morning…I am facing challenges with blood glucose levels and can feel lousy some days, but I have found that consistently running has a beneficial effect for me.”

Although it’s Jack’s first marathon, it won’t be his first Run For All event. He says his experience has been “overwhelmingly positive. The race day vibes and encouragement are the best. The organisation of events is fantastic. It makes it easy to turn up and take part. I would encourage anybody to get involved if they wanted to start running.”

Like many of our Yorkshire Marathon participants, Jack was drawn to this event due to how flat it is. “I have an affinity to trail running, I love hiking and being outdoors. But (I’m sure I’m not alone in this) I hate running hills,” he explains. “The biggest appeal was the lack of elevation in the race. Having run Leeds Half Marathon a couple of times, a good portion of the start of the race is uphill. Whilst it is a good challenge, I wanted to ease myself into longer distances. The goal is to run some ultramarathons in the Lake District in the not so distant future. But for now, I am focusing on getting road race experience.”

Training is going well for Jack, and he loves getting up for early morning runs. What’s Jack looking forward to most about the big day? “Crossing the finishing line feeling proud…and replenishing all the calories.” He says, “Good luck to all my fellow runners and I’ll see you on the start line!”

“You’re just never really aware of it until you need it”: the couple fundraising for the Sick Children’s Trust